“We have to laugh”: Brexit art exhibition hits Paris | art

The winners of a cross-channel competition for amateur artists to shake off the Brexit blues were exhibited in Paris.

I love you, Moi Non Plus has submitted 400+ entries including paintings, illustrations, photography, music and writing to explore the new British-French relationship. Many posts featured the union flag and tricolor flag, while others related to fishing, the most controversial issue between Britain and France after Brexit. 20 works were selected for the exhibition.

Ruth Mackenzie, Chair of the London Council of Arts Council England and former director of the Scottish Opera, which divides her time between Paris and London, came up with the project to remind people that Brexit was more than just an economy.

“The artwork submitted by people showed the depth of the emotions triggered by Brexit, which ranged from anger to grief and sadness with a lot of humor and wit. Most people found something to laugh about, even if it was bittersweet, ”said Mackenzie.

“We had entries from young people to retirees and from all over the world. For me it showed that we have to laugh, as heartbreaking as Brexit may be. “

The title of the competition, I Love You, Moi Non Plus, was inspired by Serge Gainsbourg’s 1969 hit with Jane Birkin, Je T’Aime… Moi Non Plus. To inspire amateur artists, some celebrities also took part. 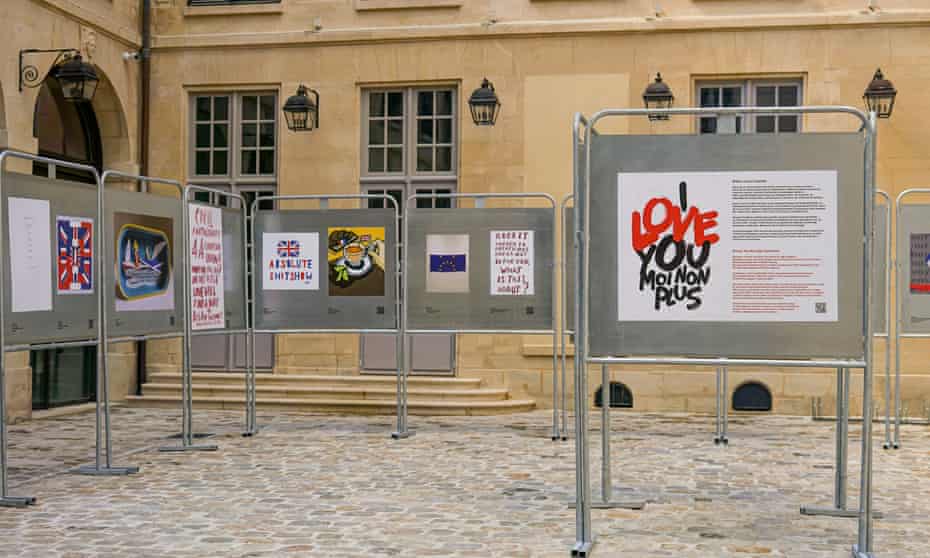 Brian Eno contributed a design that combines the British and French flags with the words “Enmeshed” and the French translation “Entrelacé”.

One work entitled “Something Precious Has Been Lost” was a photo of two hands holding a single yellow star from the flag of the European Union. Another showed Scottish and French fishermen and the caption: “Tu apportes la sardine (you bring the sardines), I bring the toast. We have a party together. “

Charlotte Paszkiewicz, whose entry showed a child walking a tightrope from a Paris building to a London phone booth, said the competition gave her the opportunity to “create a work of art on a subject that matters very much to me”.

“I live in the UK with my English husband – we met almost 20 years ago as students through the Erasmus program – and our eight year old little boy whom I want to raise bilingual, conscious and proud of the English and French culture. ”

“That was more difficult than the spring theme because people really had to think about what post-Brexit life meant to them. It was interesting that we had so many entries from children because the subject is a pretty complicated concept, ”said Mackenzie.

Could One Simple Pill Beat COVID-19? Pfizer is trying it out

Justin Timberlake urges Britney Spears’ family to get this right

Birmingham museum that returns art to the Alaskan tribes